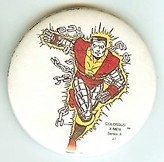 As, the so-called “Copper Age” basically encompasses my Junior High School through High School years, I find Very Fine / Near Mint to be entirely engrossing with it’s period comic coverage and music and wrestling videos.  As much as I am a kid of the 70’s and shamefully look back to ALL that stuff with pure unabated nostalgia (even when so much of it was crap), I have an entirely cynical view of anything that even slightly approached crap during the “copper age.”

That said, what happened in ’92 to make the cut off for this period ’91? I certainly remember getting back to college in the fall of ’92 and noticing a distinct change in the kids on campus, clothing, music, attitudes as if the grown ups were suddenly gone. For the focus of this blog especially–Image Comics hit the comic world like the Thing’s knock out punch-a hit we’re still feeling to this day; and of course no one could really look fondly the same way at Poison or Motley Crue videos after Nirvana came around.