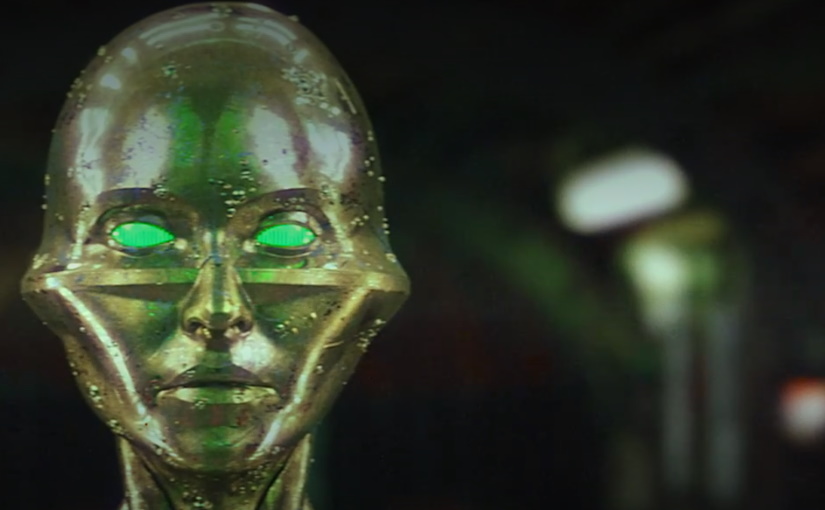 This is a film of note, not because of story or dialog, but because of visuals, sound and ship design. This has spoilers, which does not matter because it’s the experience of watching what happens rather than what actually happens.

The characters are two guys —some sort of space scavengers (Vascan and Lago), one young, one old, and their ship which is a female AI (Tracy) that that apparently at least one of the guys has sex with. The AI doesn’t always let them do what they want (this doesn’t have a ton of explanation) and there is an admiral or something like that who is on a larger mothership that is giving them their orders.

These scavengers shoot down a space ship that crashes on a planet. They have their ship land on the planet and the young one gets out of the ship to start retrieval and is confronted with some amazonian style women. The old man has a heart problem and is reluctantly saved by the ship’s medical system. The guy on the planet fights the amazons and the women get the drop on him and start some ritual on the destroyed ship that releases a naked woman with a glowing downside cross on her stomach and crotch regions who flies off into space. The scavengers escape the planet after capturing one of the amazons, and they follow the naked woman who flies off into space and heads into a strange warp. This leads to a spaceship grave-yard with some massive space ship/death star thing in the middle of it which the naked lady heads for and goes inside. The scavengers land on the planetoid and the young guy heads inside with the amazonian. He finds a room with the naked lady and the amazonian gets the drop on him in a strange sex scene (the only one in the film and it’s fully clothed the whole time) and kills him. Then a clone of the young guy goes back to the ship and tells the Admiral to come to where they are as soon as possible to capture this entity. This kills the old man member of the crew who has a heart attack after realizing that the young guy is a clone. The clone blows his own head off with a laser weapon. The admiral shows up and the amazonian woman puts on a glowing gas mask and conjures up a PILE of naked women ghosts from ALL the ships in the spaceship graveyard who then attack the admirals ship with pieces of their ships. The admiral’s ship is sucked into the planetoid and the whole mess morphs into, you guessed it, a GIANT NAKED WOMAN. The amazonian goes back to the scavenger’s ship and does something to the old man that died of a heard attack so he wakes up with glowing eyes. The other guy wakes up INSIDE the giant space woman trapped in her flesh. The end.

There are a lot of interesting shots and sequences in this film but my favorite one of them is where a ‘sun’ is rising over the ass cheek of the naked ghost girl like the beginning of G-force or any other sci fi film you’ve ever seen. I just laughed outloud at this. 50 minutes, recommended.