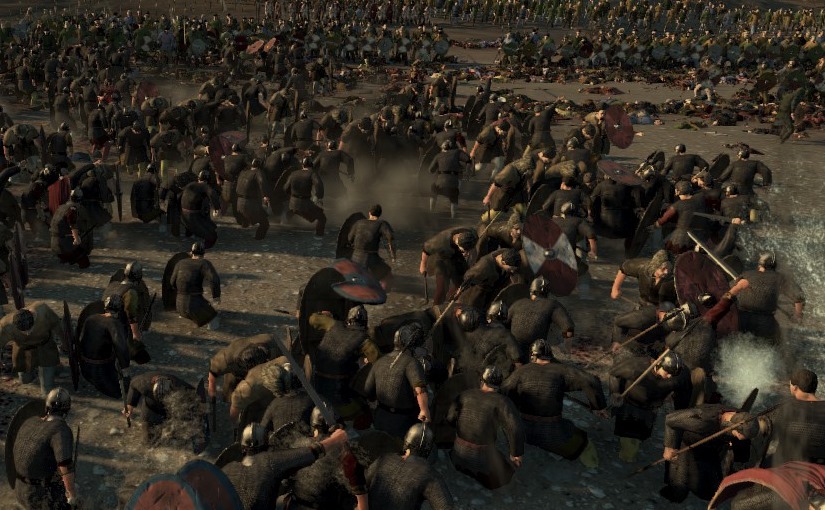 I was home sick a couple weeks ago on a Monday and decided to give Attila Total War another go.  I played it for awhile when it first came out and it was just too hard to get into at the time.  After a fairly static and easy time (for the most part) with Rome 2, Attila and is insanity incarnate for a 4X game, a true successor to Rome: Barbarian Invasion from back in the day, and it’s  fucking awesome.

There are a few very hard Total War games, most are pretty easy to play, even on the hard or very hard difficulty.  Of the ones I’ve played, Attila and Shogun 2 rank up there, with maybe Napoleon in there somewhere.   The main thing about these three games is that your imperial designs are not pre-determined at all in the face of all the shit that will be going on in the game.   In Shogun 2, even if you made a move to attack your neighbor, the other neighbors will instantly pounce and attack your stronghold, so you needed to be patient to start to be able to build up a group of provinces.  And if you do, you will likely attract attention of the larger factions that will swat you like a fly early on.   Attila is similar.  Even if you play as one of the three big empires (eastern and western Rome, Huns) you still have a tough time of  it with both the Roman empires collapsing on all sides, and the Huns in one big horde to begin with.  If you play as one of the minor factions, you will be lucky to even survive a few years with some really pissed off neighbors.  In Rome 2 and other TW games, factions nearby typically have to get ‘triggered’ before they come after you.  You don’t start in a massive war with the Achaemenid  Persian empire and all their allies at the beginning of the game in Rome 2 for instance.  In Attila, you basically start at war with all the big factions and are surrounded by pyssed off little factions.  While some of them get weaker over time, some do not.  If you yourself are a little faction (like the Franks or Jutes) it is essentially a street fight to see who is going to survive long enough to even interact with the larger factions.  This is golden.

Yes, Shogun 2 is a hard game, but what happens in Attila that makes Shogun 2 a bit of a cakewalk is the fact that factions pushed out of their homelands will become hordes and start ravaging wherever they are in order to raid for money, or try to find an unprotected city or village to take over and settle down: and that could just as well be yours as anyone else’s!  You can be sure that your conquests will create these hordes, but even worse, the conquests of others will fire these guys up as well, especially as the Huns move West.  Everything will be going OK and then bam!, two hordes show up on your doorstep and either need to be dealt with, or just waited out, accepting the path of destruction that they will cut through everything.  The Hunnic hordes are different as they do not peter out, but get stronger and stronger until Attila himself is killed at which time they become normal hordes.  Since horse archers are the absolute best unit in the game, the Hunnic hordes are very, very difficult to deal with.

The weather is another factor in the game, as in Climate Change.  During the early Dark Ages, the northern hemisphere got colder and places like Greenland, Iceland and Northern Germany became places that could support far fewer people than centuries before.  This happens during campaign game, making anything north of Italy subject to severe winters and reduced crop yields.  Think you have your food shortages handled after 15 or 20 turns?  Nope.   This has the effect of forcing everyone south and west to grab up the arable land.

Lastly, a rather new mechanic for TW games is razing settlements.  Basically if you, or your opponents, win a siege battle against one of your settlements, they can completely destroy it, so that it has to be recolonized entirely.  Much like bombing planets in MOO, this has horrifying potential if you are backstabbed by an ally or have an angry horde come over the horizon.  The Caledonians in my campaign were reduced to a single fleet that I ignored. It ended up in Southern Britain and destroyed two of my provinces before I caught and slaughtered them.  Thankfully, the viking reavers will rarely Raze, hoping only to pillage so that they can come back the next year and do it again.

I started play as the Saxons and I think I had to restart 4-5 times before I was able to even survive past the first few years.   You begin with the Franks and Langobards nearly at war with you from the outset, and all of the northern pre-viking factions aiming directly where you know you need to go:  Britain.

Over the campaign, I was able to make some friends with the proto-vikings in the north and solidify my hold on Britain and Fresia (Belgium).  The South of Europe and East were in total chaos with everyone just running away from the huns.  Nearly all of eastern Europe, including Italy, was a complete wasteland.  The Western Roman Empire was stuck in southern Spain and many of the major migratory factions (Ostrogoths, Visigoths, Vandals) were hiding in Northern Africa.  Eventually my expansion met with the Hunnic horde and they declared war and it was on!  Saxons vs Huns, just like it was supposed to be.

What’s unique about Attila is that this scenario may not have happened.  While the Huns always attack, they may have spent most of their time vs the Eastern Romans and never came into Europe, or the Visigoths or Vandals may have created an empire strong enough in central Europe that was able to hold them off.   This not knowing what the fuck will happen is a major draw.

Overall, like Rome: Barbarian Invasion of old, after suffering through the early difficulty and realizing the TYPE of game that it is, I like Attila more than Rome 2 and it could be one of the best Total War games. While I really enjoy the classical battles vs the Macedonians, Persians and Gauls, the absolute chaos as well as the remorseless destruction of the Western Roman Empire over the course of the game, just puts Attila as one of those special Total War games that will get years of play.  It doesn’t hold your hand and it lays out it’s challenges early on and says: here they are, see if you can handle it.