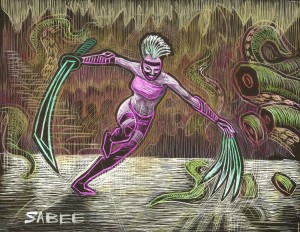 I’ve long been a proponent that Ascension is simply an exercise in random card drawing with a random outcome for the winners. We play this a lot on the iphone/ipad and while I could never imagine putting up with the complete mess of cards that this one likely generates (in comparison with the excellent iphone app that cleans all that shit up for you) but, I now have over 210 multiplayer games under my belt and I can say with 100% pseudo-statistical confidence: Ascension is a random game. Your percentage chance of winning any game of Ascension equals 1 (you) divided by the number of players.  3-man games you will win 33% of the time, 4-man games, 25%, etc. I am not a good player, but I’m not a terrible player either, I know what cards are good and will win you the game if grabbed early or grabbed late, but I don’t use any tactics, I don’t watch what other players play and I don’t really pay much attention except to execute a singular deck combo I’ve started at the beginning of a game (like draw lots of cards or kill tons of stuff).I’ve seen a lot of combos, but there are some I certainly have not seen. The fact is, regardless of 100% knowledge of combos, you don’t know if you will have access to those cards that you feel you need to win. That said, let’s look at my stats:

So what I’m going to do in the next few months is try to get good at Ascension– if that’s even possible.   Playing with all the cards in the game (on iphone) and actually paying attention to what I’m grabbing, what other people are doing to actually use some tactics.

I’d like to see all stats for all players that have ever played– I think that would be just as telling as the percentages likely match those above.   So here we go, I will actively be trying to kick your ass at this point to try to disprove that this is just like a game of War– totally random winning.