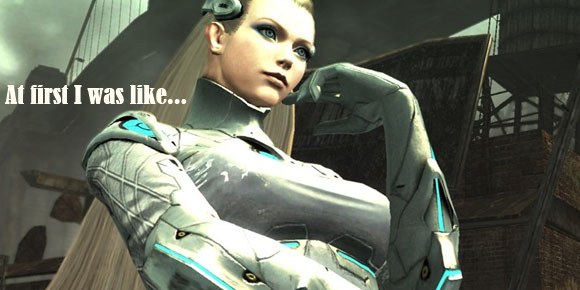 Anarchy Reigns.  Best way to describe it is Twisted Metal without the Cars or an insane Power Stone. You run around and punch people and use specials and it’s pretty crazy.  I jumped right into Multiplayer and after two rounds– the greifing began.  When in a multiplayer Deatchmatch room that requires X amount of slots (say 4), it’s possible for a single player to bomb the whole lobby by constantly entering, selecting that they are “ready’ then un-readying it before the timer countdown locks the room.  This happened for about 8 minutes before I quit and went to the campaign game.  Gamers will grief whenever they can, naturally, but this type of shit should have been foreseen.  The game has been out in Japan for a long while now.  You can’t tell me NO Japanese tried this same shit to bomb a lobby?

Anyway, the rounds I got in were chaotic, but fun.   I’ll put up a full review when I get through a mess more of the game.