I read a bunch of history stuff this year along with my usual sword and sorcery and noir pap and these are some random thoughts on each if you have an interest. All three of these are extremely accessible for the non-historian, and with the exception of the last one, are quite short to boot. 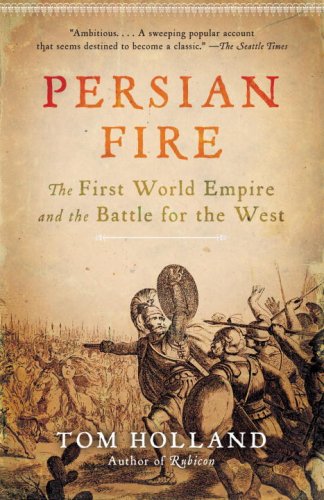 Before reading this book on the Persian Empire (and Meades and Assyrians by extension) I had no idea what cruising meant in Sparta, I knew it as something people did with muscle cars down on the south side.  Yet, it has a different meaning when applied to Spartans.  We have this vision of the austere, martially focused and hard-hearted Spartans going to war together and fighting against the decadent Athenians and Persians. Well they were all those things as you had to kill a HELOT during your early teen years as a right of passage (yes, in the movie I know it was a tiger or wolf or something, but in real life it was a person and it wasn’t a straight up fight/kill, it was supposed to be a sneak-kill to boot), and they lived in barrack most of their lives.  Despite being all bad ass in the movies (which to some extent they were in real life) the actual citizen Spartans also had people to do all their work (Helots: who were basically slaves) and  were always worried about the helots revolting, which they eventually did. None of these things may surprise you, but Sparta’s habit of cruising might. Basically, once you got to be about 12 you could be legally raped at any time by any older members of the city (not Helots!). Girls AND boys would both be raped, and for the boys usually they would get other types of favors from their male rapists after the deed or deeds. The girls, of course, were not allowed to get pregnant while being cruised, so it was up the bum and no babies for them too.  The title of this post comes from a line in this book describing Spartan wives as anally proficient virgins out of the gate. Quite disturbing and really one of the punchlines of Tom Holland’s excellent PERSIAN FIRE. For me, this book filled a gap of pre-Persian empire history between the Assyrians and the Persians attacking Greece across the Hellespont and Marathon and all that.  As one of the best currently working narrative hostorians, and like Holland’s RUBICON, it’s highly recommended. 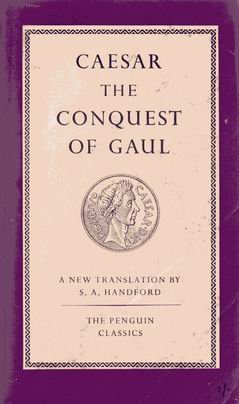 Secondly, I re-read Caesar’s Conquest of Gaul. This was an amazing read as it’s written by the man himself (in third person no less) about him dismantling in detail the petty empires of southern and northern France (with the Germans getting in the mix a bit too). There are a few pretty disturbing parts due to things NOT said rather than what Caesar is writing. For example, one Gaulish town that had a big wall around it had a Gaul army swing by for a visit despite the townspeople’s wishes since they were being pursued by Caeser.  Soon after, the town became surrounded by the Romans who they themselves built a second wall around the town and then an OUTER wall to protect their inner wall from counter attack. The Army of Gauls that were in the town ejected the town’s original inhabitants (you know, the old, and women and children) but they had no where to go as Caesar would not let them through his walls– so they stayed outside the town between the walls until they fucking died of exposure and hunger. So, I think it was Dan Carlin who said something like– ‘go ask the thousands of people that Caesar killed if he was a ‘great’ man or not.’ To the Gauls, he was a right bastard for sure. Like Machiavelli’s The Prince, Conquest of Gaul is a pretty good handbook on how to fuck people over and how to not get fucked yourself in real life, as well as a poignant view into one of histories greatest figures. 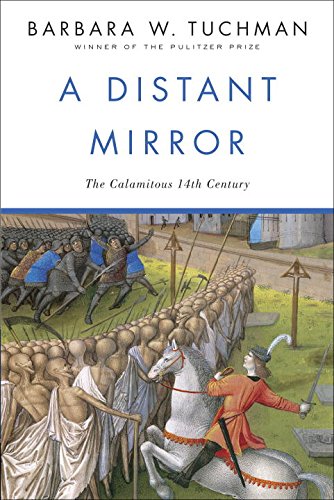 Lastly in the history area is a friggin’ monster of a tome I picked up on a whim and found was as amazing as it was horrifying. A DISTANT MIRROR by Barbra Tuchman details 1300 – 1400AD in Europe (mostly France and England) during what I think could be the worst time in history for human beings on the planet Earth. This hundred years, in France especially, make the Dark Ages look like a fucking Mayday Carnival in comparison. The Black Plague depopulation, a completely corrupt and luxury focused Catholic Church that goes into a non-protestant Schism (it wasn’t about doctrine, there were just two popes at once and neither would abdicate) whose response to the black plague was to increase the price of pardons and the like to those who were left and who would persecute ascetic monasteries who weren’t as greedy since it made the actions of the mother church look bad, and let us not forget the Free Companies that ravaged France and northern Italy for the early part of the century. Lay on top of that completely destructive private wars between noble families (like some sort of West Virginian blood feud except these people had lots of money and castles and towns and cannons) and you have a simply horrifying hundred years. The book loosely follows the life of Engerrand De Coucy, an actually pretty swell noble who owned a massive (now destroyed) castle in Picardy during the century. I recommend this book heartily but it is extremely LOOOONG and took me a month or so to push through. It’s also quite amazing to me that a book of this sort was written by a woman.  If you are looking for  some of the historical influence to A Game of Thrones or Liebowitz and the Wild Horse Woman (who’s central plot is the schism in the church), this is a singular read.