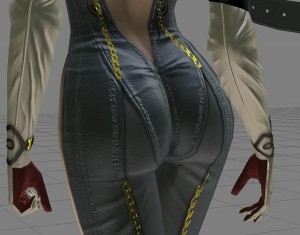 The all-to-brief-time off during the holidays has allowed time for gaming indulgences that wouldn’t normally fit into the schedule.  Along with a marathon boardgame session last night (Dominion, Dragon Lairds and a virgin copy of Nexus Ops hit the table), I was able to take 20 minutes and wrap my fingers around the Xbox controller for a run at the sumptuous Bayonetta demo.   When one is blurting out filthy epithets like  ‘holy shit yeah’ and ‘fucking awesome’ when no one else is around to hear, it can mean a few things, but in regards to the Bayonetta demo– it means you are experiencing the non-stop climax action AS ADVERTISED.  After the short tutorial; the first conflict with the angels takes place on the surface of a shattered clock tower as it plummets off a cliff to the ground below: full on showing off the jaw-dropping visuals.  The character designs, especially the leading lady herself, are truly inspired– massive ‘angels’ with emotionless cherub faces and giant battle axes named “Beloved,”  long, flowing, snake-like dragons in an asylum mix of Eastern and Western mythology.

The controls and basic combos are extremely simple to learn, and many of the moves are conditional to your surroundings; depending on distance, above/below in relation to the enemies.  In fact, most combos will just come out with your flailing fingers button mashing, at least at first.  Much to my glee- the game has an evade button much like Godhand (which, yes, I was not man enough to complete yet), but with the added bonus of allowing you ‘Witch Time’ if you evade attacks at just the right moment.  I haven’t seen many of the torture moves yet, but the two I’ve seen (throwing someone into an iron maiden, and running another through a set of pullies and gears) were fairly impressive.

I’m fighting the urge to span some more time running through it again or wait until the full version is out.  It’s not a fight I can win.