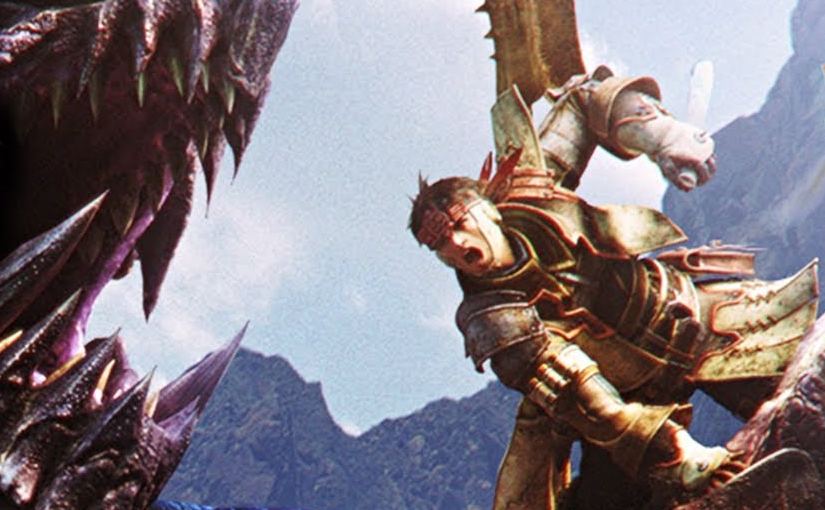 This is going to be my LOOOOONG post for the week.  For my bus ride to work, I got a “NEW” 3DS XL only to play Monster Hunter 4 Ultimate Edition.  Now, this is an expensive bit of hardware at 200 bones plus 40 for the game, and I wanted to speak along such lines in case people were interested to see if it was worth it. TL/DR: it is.

Many of us do light gaming on our iphones or androids when we are waiting around for other shit to happen.  These mobile games are good, but casual, and frankly, most are a bit on the shite side.  The few that rise to the top like Dream Quest, Ascension and King of Dragon Pass can only be played for so long before burnout sets in.  Even if you check pockettactics.com a lot, you find that despite the THOUSANDS of games on the iphone, so few are any good or worth playing for more than a couple hours.

What’s amazing is that people try to adapt games that need a controller of some kind to the iphone form factor and expect users to use an on-screen pad or joystick plus buttons.  Shamefully, I have bought some of these games: King of Fighters, Monster Hunter 3 and others.  They are not bad games, but they are terrible to control and pretty much useless on the form factor.  You’ll read favorable reviews of these games and the on-screen joypads, but let me tell you when you use the 3DS XL for similar games, the iphone fucking sucks in comparison.

Engineering
Being Nintendo, the engineering of the 3DS is top-fucking-drawer.  Everything is responsive, button presses are crisp and they added this little NUB in the upper right of the lower piece that can be used to control a camera view in third person 3D games– which is absolutely perfect for games like Monster Hunter (or Dark Souls, or Skyrim, etc.).  I didn’t use this at first and was sort of frustrated, then found it by accident and it was like a completely new experience that blew my ass off the whole bus.

Loading times, the bane of any system, are nearly non-existent on the new 3DS XL, which is not what I expected.  The main issue with Monster Hunter is that you are in relatively small areas, sort of like the original Fable.  The monsters run off and sometimes you fall into another area and you get a loading screen.  If it’s slow, this is extremely frustrating.  On the 3DXL, sometimes I find myself wishing they were slightly longer!  While the game I’ve played on it was fully 3D, it’s not like it is pushing tons of polys, but what it does it does FAST.

Games
Let’s face it, as a geezer I’m not in the demographic to be playing 90% of the 3DS games currently out. I do enjoy a JRPG from time to time, but most of them are real… kiddie.  Yet, most parents aren’t going to buy their kid a 200$ gaming system when those fuckin kids already have an iphone or ipod touch, so I have a feeling that the older generation X people that grew up on NES and SNES ARE the target audience for the new 3DS XL.  For us though, there is only one game out currently, and that’s Monster Hunter 4.  The basic question you have to ask yourself is whether or not Monster Hunter is worth 240$ in cold hard cash as there are, at present, no other games that really pique my interest at all.  Since Nintendo is really it’s own hardware and software shop and don’t let too many people into the party, there’s never going to be a glut of games, but the games they do release, if you are in the target audience, are likely gold stars.  So is MH4U worth it?  Emphatically with about 25 hours into the game, I would say yes.  Given that MH is a way of life in Japan, it doesn’t take long to figure out why it’s such a phenomenon.

MH is a cheeky ARPG game where you play a guy or girl that hunts various large monsters, skins them and make armor and weapons from their bodies (and foods).  Essentially, there is a little exploration, quests, a bunch of item management and then a huge amount of boss battles after boss battles.   These boss battles can take up to an hour to complete so it’s serious business when you start a mission vs a monster (or multiple monsters).  Whats more, it’s local and online multiplayer, so you can hunt monsters together (which I haven’t tried yet).

Aesthetics
While this is not going to win any awards in pushing any type of edge for 3D graphics, and is fairly low polly, what the developers and artists DO with those pollys is gorgeous, much like Warcraft 3.  The monsters are beautiful and highly characterized.  The NPC’s you can’t get a really close look at but they look fine and the vistas are absolutely breathtaking in some places.  If you do get the game, remember to look up on ever map!

What hooks you is the armor and weapon sets, which I’ll go into more in the item management area below.  There are hundreds of combinations of armor based on the creatures you destroy and can craft and going from looking like a country bumpkin to a badass motherfucker with mothra wings and chitin legs is a very pleasurable experience.  While stuff like Dark Souls and Skyrim are great RPG’s, they are also fucking dress up your doll games, and MH has that in spades. You like doing that? I do.

Gameplay
I was very much hoping MU was not a God of War/Kratos type game where you just have a wank at how badass you are and can pull any moves your character has at any time and the monsters eventually fall down.  After Dark Souls, those types of games are unplayable to me and luckily, MU is not that shit at all.  MU is a very tactical real time boss fight game that doesn’t eschew the cinematic parts of the fights, but it’s not about that stuff primarily.  You have to really time your attacks, know your (very short) combos and use your items like traps and tranq bombs wisely or you will be chopped meats.  There’s a lot to go into here but the core game is you, in third person view, going up against a monster that is 10X your size in some cases.  You can’t pause, and you can’t use items while your weapons (and sheild if you have one) is out in most cases. You can jump on top of Monsters and hang on (like Dragon’s Dogma), find their weak spots and chop them off (like a tail) and run all over the place climbing up walls, dodging all over. Tactics, movement, placement of attacks all in real time can be quite challenging and fun.

The main adjustment you may have to make as a new player is that it’s not particularly hard, nothing like Dark Souls, but when you go after one of these big beasties, you have to go all in.  You can’t just walk up to it and start whacking away and expect to kill it or even survive.  The game forces you to take a very planned approach to your take down.  Do you need a shock trap? Do you need to paintball it a lot because it runs a lot?  What special damage types or effects does it generate that you need special armor/potions for?  Can you take it alone or do you need help to draw aggro while you climb on it?  Do you have weapons/damage types that can hurt it?    there’s a lot going on with each of the monsters. Some even transform during fights into either a super mode or a weak and running away mode that you have to deal with.  It truly engages the dexterity and the tactical brain in many of the same ways as Dark Souls and it’s FROM ilk.

In addition to the boss monsters, there are mook monsters and gather quests, but they are really easy (so far at least) even the annoying egg gathering quests. Fun filler when you want something not so intense for a bit.  Soon you will be back to take down the big guys though.

Item Management
As a former Diablo 2 Zyel and current Torchlight 2 player, I do enjoy light item management in my games.  I’d say MU leans to the hardcore item management a bit rather than casual.  Armor does a lot, augmenting skills and having slots for some sort of gems that I’m not sure about quite yet.  There are a lot of options for armor and weapons in the game and of course the armor aesthetics are critical.  Killing enough Gore Malgala to have a full set of armor is quite a feat.

Weapons are similar and I would describe your weapons set you choose as your ‘Class.’  So you can switch classes at any time, but then you’re going to need to build a suitable weapon from Monster Parts to match and that can take farming.  From what I’ve seen, many players have their main weapon set that they are best at and a secondary for Multiplayer support or role specific.  There are tons of different weapons in the game, and each type demands a specific style of gameplay.  I run two weapons at once, despite lindybeige, and it’s very unique even beyond just constantly attacking in that you can power up your chi or whatever it is and then go into a sort of super mode and then go into a super mode on top of that if you play it right.  While unique, the weapons are not complex with the exception I think of the Insect weapon where you have a big sword with a bug on it that you can send to attack or gather items from the monsters themselves.

The 3DS XL (new version) is an amazing piece of hardware that I’ve just scratched the surface on in terms of games.  Monster Hunter 4, being THE game for the system above all others is quite simply a reason to buy a 3DS in the first place– likely, you may not need any other game for the system.   The fact that it plays the old DS games like Disgaea and Advanced Wars no problem is another big bonus, because a lot of those games are cheap as shit these days.

3 thoughts on “A “new” 3DS XL and Monster Hunter diatribe”