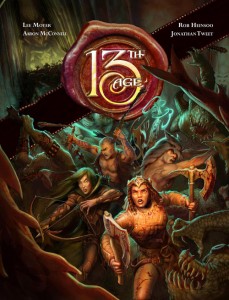 I have been holding off on this post because the 13th Age core book was maaaaaat’s Xmas present and didn’t want to spoil it, but now I can wax on and on about how I think this is the version of D&D that I will actually run.  It’s got the D20 crunch and leveling with a lot of stuff from FATE and Feng Shui that I’ve grown to love over the years.  The game is a product of the two developers of 3rd and 4th edition D&D and represents, as near as they can agree on, their homebrew D20 system– and it’s awesome.

I’ve watched D&D from afar for awhile now, the tactical triumph of 3rd edition and the massive resurgence of the genre with the 1-2 punch of the LOTR movies and 3rd edition, then the Descent-like 4th edition (which should have just been a huge box set with tons of miniatures instead of the big ass books), the B/X-OSR movement with Labyrinth Lord and Lamentations of the Flame Princess bringing it back to the Basic D&D books we actually played back in the day (pulling only monsters and spells from AD&D).

All that said, I threw in the towel on actually playing D&D in the mid 80’s for various reasons– first off it got pretty boring. Roll up a character, fight in a dungeon, get loot, etc. By ’86 or so there were many other options and settings. Paranoia, TMNT (don’t laugh, it was a fun game), Cthulhu and the game that killed D&D for me for pretty much forever: Warhammer Fantasy Roleplay.

WFRP killed D&D for many reasons, first off it was badass visually. It’s like putting the Fiend Folio up against the Monsters Manual– the art in the latter, with the exception of Dave Trampier’s amazing work, PALES in comparison to everything in Fiend Folio. For the same reason WFRP’s art (and miniatures) were beyond compare in the late 80’s to everything else. Secondly, the game was mature and getting into the mid-teenage years, this was important, while 2nd edition D&D was artistically bland and took no chances at all with gore, WFRP was all about the goreplosions, insanity and corruption.  You weren’t just going into dungeons and looting stuff for the sake of loot, you were committing crimes and murders in a fantasy setting (or rescuing bratty noble kids) within a backdrop of an absolutely dismal (yet magical) campaign world. Your patrons were always the shadiest of individuals and every adventure threw new things at the players that were not dungeon romps at all, especially the axiom that is so important to good adventure design these days: “no good deed goes unpunished.”  Players weren’t plowing through hordes of over-used ‘non-humans,’ instead they were in deadly fights most of the time with humans or human-like mutants.  Anytime you’re up against non-humans in WFRP, likely you were dead meat.*

Third, the career system in WFRP was excellent and a vast improvement over leveling up. While it’s just a set of skill and bonuses, the WFRP career system still makes me want to play the game every time I read it. Instead of a flat set of stats and weapons (that are all just bonuses to your stats) WFRP had a rich set of skills for players to acquire that allowed the fighter and thief to be as interesting as the Magic users with their spells. Finally, the adventures went into some very morally difficult ground. It goes without saying that the quest and campaign writers on WFRP back in the day were doing things no one else (maybe Cthulhu) would even touch.

So why play D&D/D20 at all?  Why bother? There’s an itch that just can’t be scratched with the FATE/Cortex and that’s the dungeon romp and repeated monster smashing.   While FATE and Cortex (and their ilk like Burning Wheel) are amazing for short narrative campaigns, the play is missing three key things that D&D/D20 offers: Dungeon crawling with lots of fights, leveling up and magic items. What’s more, combats in FATE/Cortex are so definitive and deadly that it’s never about the grind: in an even fight likely some of the characters are going to take serious consequences or be taken out entirely.  Fights are always about story progression, and when playing FATE/Cortex, that’s awesome.

What 13th Age offers players and DM’s is the ability to have D20 style fights and levelling with some of the best parts of FATE/Cortex’s story driven elements.  Combat and combat power is taken out of the narrative system by design.  Whereas characters in 13th Age have ‘aspects’ (backgrounds) like FATE, they cannot be utilized in combat–but they are there for everything else to push the story forward.

So with the announcement of 5th edition D&D slating it for this summer and Pathfinder continuing on the grid-based, tactical version, I’m saying to my 2 readers that the new D&D is already here, and it’s 13th Age.  It’s not the D20 for every group but it’s a great compromise between the level up crunch and the narrative.

Here are a couple of high points:

*Unless you were a naked dwarf