I’ve had some fun with D3  with two characters just over level 10, but it has problems, problems that might be OK if it were an MMO and I liked MMO’s.  It’s not an MMO and the problems with latency, the rubberbanding and error 33, patching errors are just ridiculous, especially in (drum roll) single player.  Your mileage varies I’m sure but to put it bluntly, D3 is not a very good single player game.  It’s linear, it’s pretty boring so far except for the boss fights and seeing all the stuff in the environment you can blow up.  This is par for the course with the Diablo series: they are not that great single player games– the Zyel mod was created specifically to give players that wanted a good single player experience a better one than could be gotten off vanilla Diablo 2.  And, please, go back and try to play Diablo 1 without falling asleep in your chair.

Multiplayer– that’s where the game shines and while it’s been fun it’s been marred, of course, by lag– maybe acceptable in this early stage if the two core things people want out of the game are fulfilled: fun combat and fun item management.  The former is OK.  I’m still on the fence about it.   The concept I want to talk around with D3 is the idea of RELATIVE fun.   On it’s own, D3 is good, it’s not great, but when you put it up against Torchlight 2 it falls completely flat.

I reiterate some of my earlier posts– once you play Torchlight 2, it’s really tough to go back to Diablo 3’s slow, ponderous gameplay.  It feels like going from fast paced hyper Gauntlet madness with craziness at every turn in Torchlight 2 to slow, static and, while visually appealing, fairly stagnant fighting in Diablo 3.   The second point of fun, item management, is a fucking chore in D3.  While I’m still low level, drops are shit and from what I’ve read and heard– it doesn’t get much better.  The items so far are bland and overall the crafting really feels like a combination of Hellgate London and Titan Quest with all the breaking apart of items into more crap and crafting into….yay more of the same crap you picked up!  Basically you take all your blue items and yellows you do not want, throw away the white items (they are totally useless in the game–and the grey items? what in the flying fuck are they doing in the game?), break the rest of them apart because they don’t fit your character and then take the sub items ( like subtle essence) to create some type of item with a reroll on the effects— in turn this item may not work out for your character so you break the produced item apart and when you have enough sub items again, you get another reroll which may or may not work out for you.  There’s no way to influence the reroll (like a cube lock for example)  There’s no path of crafting other than this that I’ve seen (sockets and jewels– though no runes or rune words). From what I’ve seen so far, it’s quite tedious.  I made 11 or so belts and they all had almost exactly the same powers– nothing special, nothing that gives your character access to anything outside of his set of attacks (like a summon power for a barbarian).

So now I sit waiting for a patch that looks like it’s going to take an hour to download and I’m thinking:

what the fuck is a man to do when diablo 3 is over a year away from being released? how about doing some hardcore diablo 2 runs, ya thats right, HARDCORE D2!

NOTE: i’ve never tried to play a hardcore character in diablo 2. this is my first time.

NOTE: i’m going to do my damned best to keep a diary of my progress playing single player hardcore characters here on mraaktagon.com

NOTE: i’m using diablo 2 v1.13c (the latest patch for diablo 2 at this time), plugy 10.00, i’m using some german 3dfx glide hack that lets you use the 3dfx setting with a video card that supports opengl or some shit (makes the game run better!) and that’s fucking it. i’m not going to install any cheats. if you think plugy is cheating that’s okay for you! the main reason i’m using plugy is for the shared stash.

NOTE: i’ve played each of the seven hardcore characters classes up to lv10 just to get this warmed up. no deaths yet. i will pick one of the seven to start with and play until death / or 10 lv’s are made, at which point i’ll switch to a new character. i’ll continue this 10 lv rotation until all 7 characters are dead. this allows me to stash items away for the other characters while ensuring i don’t get fucking bored playing one character class for too long. 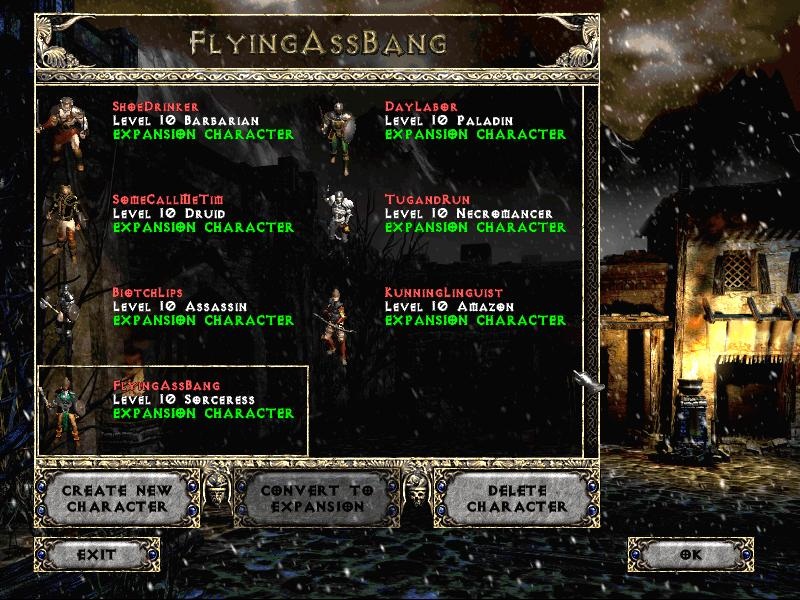 so without further fucking around my 7 characters are,

i’m going to start with FlyingAssBang the sorceress. i think i’ve only beaten vanilla diablo 2 with the amazon, barb and assassin, but that was fucking years ago people. 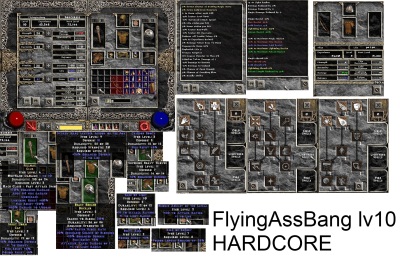 here’s a link to a large image file that has all of FlyingAssBang’s stats at lv10 and all the items she’s using. i am not making some fucking proven build from some goddamned FAQ, i’m not a pro! i’m not going to use the plugy re-spec without making a good argument for doing so and clearly documenting the use or re-spec. i’m kinda scared about how i should spend points on this sorceress character. i think you just spend enough strength to get the armour you need, and get like 50 or so in mana, and the rest goes to vitality or someshit. but how about skills? shit i really have no clue, i am learning the fucking hard way, the hardcore hard way. okay off to play my lv10-20 as FlyingAssBang. i’ll post anything of interest back here, shit i have no fucking idea what i’m doing with this sorc build, i’ve got skill points scattered in all the tree’s already selected, that is just fucking terrible. 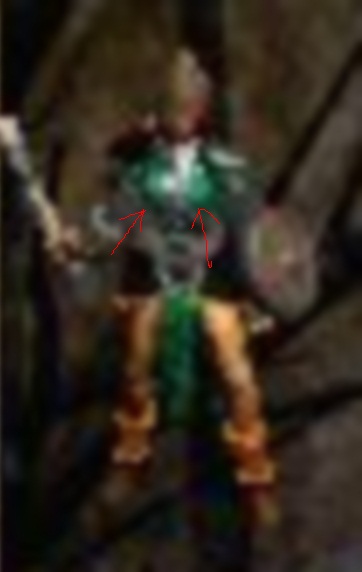