I accidentally picked up a Dark Elf army real cheap today with the 7th edition book in tow.  I cracked it open a few minutes ago and not only has it been obviously exposed to rooms filled constantly with smoke from them tweeds, it reeks as if it was regularly used to hold quantities while it’s former owner was, say, packing a bowl or rolling a fatty not that I would know about any sort of things like that.

These were from a set off ebay that I picked up pre-built and pre-primed, so there are some mold line problems on some of them.  Recipes– I hate it when people post pics of their stuff and don’t post recipes.  Flesh is over a black undercoat, Dark Flesh, Vermin Brown and then Vermin brown with a slight amount of bronzed flesh for the final.   I use the dynamic layering method so no washes, and only drybrushing where it really makes sense.  The axes turned out pretty well as I overbrushed the blades and then cleaned up the head of the axe with a wash of black to just lightly cover the dry brush.  Again, these are core troops, so if hold one to your eye you will see the impressionist style that layering methods create (as opposed to blending).  and each color only at most, four layers (In contrast to 10+ for a blended model). 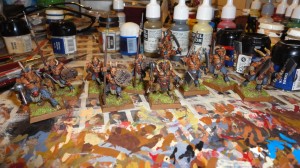 This batch of models includes the first time in history that I enjoyed painting shields.  The plastic shields GW is putting out are just exquisite.

Now I just have to keep momentum and get more on the table to drive the horn in some more Night Goblin ass.  Next up is 5 more Gor AHW.

Over the summer I fell into obsession with old west miniature gaming, well, painting them that is as I only got to play once so far.  I had a goal to get through that involved painting 8 miniatures and completing two full gangs for Warhammer Historicals Legends of the Old West–gangs that I have been ‘working’ on since 2005.  Over the Xmas break, I was able to finish all but two, and knocked the remainder out over the worst weeks of January.

Now after my first play of Warhammer 8th edition, I took a long view over my painting table and backlog in order to get to 2000 points painted.  50 beastmen, 1 chariot, a chaos spawn, a hound of scathatch, a giant and 5 harpies.  59 miniatures all told, with two of those being big models that will take weeks to complete. At my rate– about 5 miniatures per year that will take me until my kids are deep into high school.    The bottom line is, I’ve never tried to paint an entire army before– sure Necromunda gangs, blood bowl teams, etc. but nothing equaling over 100 models– it seems totally insane.  So to keep it reasonable, but to have a goal, I’m going to try to paint 10 miniatures per month, not including the big shit–the Giant will take me more than a month probably.  At that rate I should be able to spend a few hours here and there on week nights and then one big chunk of time on either weekend day.

The motivational part is that my 1000 points painted hit the table this weekend, and though it was  chaotic game where we absolutely did not get the rules right, my stuff just looked totally awesome on the table,  even painted as mediocre as it is.  Of course, the game itself was just great fun, 4 hours went by in a snap (and I stood for the whole game, forgetting to get a chair!).

The game was against Night Goblins, with their whirling fanatics, a doom diver and a stone thrower.  All three did horrific damage during the initial turns of the game, but not enough to save the hapless goblins once the beastmen closed in for the kill.  The beastmen themselves aren’t that great, just tough, but when you take into account that most of the time they can reroll misses on any round of combat with a slight chance of Frenzy happening, they get a ton of hits in combat with the potential, however slight, of just going totally fucking apeshit.  Though the beasts smashed most of the Goblin army it was actually a very close run thing and a lot of luck in the pinch.

What I loved was the huge combats– just too fun, but also the insane terrain on the board.  We randomly rolled and just about every roll had some crazy magical mystery terrain.  The forest on my left was a fungus forest that caused Stupidity in my army, but helped the goblins!  In the center was some sort of Necrosphinx who granted wishes or ate characters who tried to solve her riddle, and on the right flank was a Tower of Blood overlooking a dismal fen.  The tower of blood shot the dicepools into the stratosphere– causing units within 6″ to have Frenzy (double attacks) and Hatred (Reroll misses).  Never in my wargaming career have I rolled so many dice.

I’ve got a medium-size collection of gaming books, old D&D, some of the older White Wolf stuff dealing with the effete, paederast blood-suckers, loads of the obligatory Warhammer Fantasy/Battle/40K books, almost everything published for Exalted (of course) and quit a few random books here and there bunged from musty used bookstores I couldn’t pass up at the time.  Many of these books are impressive in their binding and artwork and design, some are pretty hefty collections of paper, especially the 2nd Edition Exalted books– however, nothing could have prepared me for the sheer size and gleaming glory of the Warhammer 8th edition hardcover.  I’d even seen it and handled it in stores before, but you forget you see, you forget just how huge it is.  Clocking in at over 500 pages literally packed with full-color images throughout–it can easily be deemed the Armageddon of miniature war-game books.  I contrast it to my first miniature wargame rule set from the late 70’s: Swords and Spells and it’s staggering reminder of how far we’ve come in the hobby– that a company that sells toy soldiers and some books to a tiny portion of the planet’s population could pull together the cash to write, design and publish something so massive it cannot even be used as crapper reading without a crapper reading stand– it’s just that friggin’  huge.

And so officially begins my descent yet another miniature gaming obsession that will produce probably less than 20 painted miniatures and 2-3 actual games in the next year.  Sad but probably true.