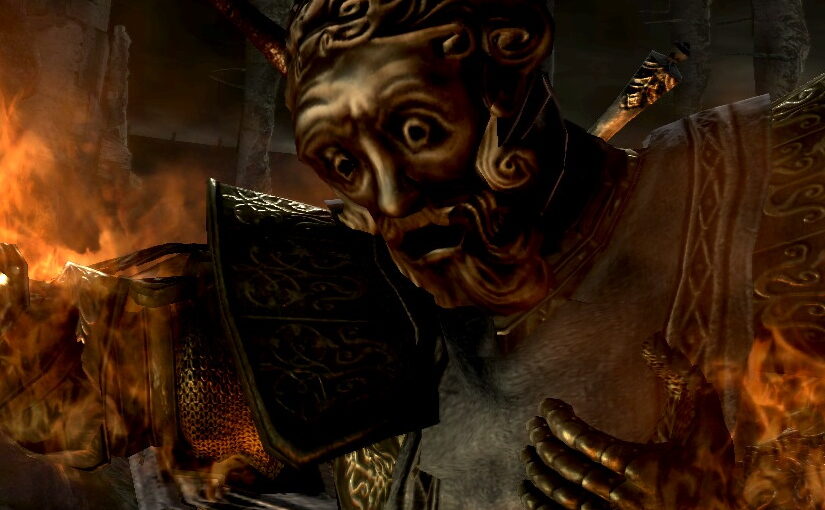 Right after Elden Ring came out I had to take a trip and was away from my PC. I grabbed the Switch for my kids but remembered I had Dark Souls on it. The Switch, from many, many hours of whatever the fuck the kids play on there was messed up with a really bad drift-stick on one of the sticks that made DS nearly unplayable. Somewhere at some random Walmart in Indiana, I found a HORI Split Pad Pro and not only did that solve the drift-stick, it made Dark Souls a far better experience to play without the stock controllers. Very much recommended for everything unless you are worried about it fitting inside your little case (like if you have to shove it up your ass when you are sent to prison), otherwise the HORI sticks make everything play better.

I was mulling over the build to use but when Pinwheel dropped the DAD mask (1/3rd chance), I knew what had to be done– Giant Dad with a fucking Chaos Zweihander. It’s a LOT of work to get all the pieces, and for new players of Dark Souls it is NOT worth it, just get the rest of the stuff and do a lightning Zweihander instead. Why? The Chaos Zwei scales off HUMANITY which means you have to run around with 5-10 humanity all the time. If you drop your souls and can’t get them back, you are farming fucking RATS in the depths for hours and hours to get what you need to hit hard enough to win.

Weapon: Chaos Zwiehander, a bitch to create, and a bitch to use but hit’s so hard…

Fatty Demon: Easy, but punishing later versions make me still hate this guy (like the Erdtrees)

Insideout Dragon : a tough fight, but the first real “boss” in the game so it better be. I lost a lot of souls during this battle for sure.

Bell Gargoyles: this was really easy, and I remember emotionally suffering in my initial playthrough.

Iron Giant: Not too bad but took me a lot of tries.

Queelag the topless: I used the summon because that one is so silly (a lady with a cleaver with a sack over her head) and she wasn’t too hard. Took me a few tries for sure and of course, that’s after Blighttown so you are always emotionally drained before fighting her, but at least there’s cleavage.

Ceaseless Discharge: this is a trick boss, so really doesn’t count. He’s easy if you know what to do and just a sad sack of fiery shit really.

Smough and Orenstein: Well… I summoned the Sunbro for help and followed the basics: Kill Orenstein first, don’t get hit by Smough and it worked out. This took me countless tries the first time through so I made sure I was good and ready for this battle, including walking in there with 10 Humanity so the Zwei was hitting hard. Big risk, big reward of the beautiful chest ahead.

NITO: one of my favorite bosses in the end game because he’s pretty easy and also scary. Advice I got was to not go in the room to trigger the big skellingtons. Getting to NITO was terrible for me though…. ugh, Tomb of Giants was worse than Blightown this time.

SEATH: This one was tough, but I just stayed near his leg and kept circling and took him down. I had forgotten the whole prison thing so that was again a surprise!

FOUR KINGS: Super easy. I remember having a ton of trouble with these guys the first play through. Just hit them again and again.

Demon Firesage: what an asshole. I kept getting the RNG on his AOE and it just killed me over and over and over. This boss I didn’t like too much because it felt ALMOST unfair.

Fire Centipeed: I lost 10 humanity the first time fighting this jerk, but summoned Sunbro again and we took her down.

BED OF CHAOS: this is my least favorite fight in Dark Souls. Just being constantly pushed off a cliff is not great fun. You can’t do anything but just suffer through this one and get it over with.

SIF: funny doggy. Not a tough fight. Maybe he’s the only good guy among all these bosses and you’re the bad guy.

Gwyn Lord of Cinder: For the final boss, he seems intimidating at first even for my second play through the game, but after playing Bloodborne where you MUST parry as part of normal play, this was a very easy fight that took only two tries! I just parried him over and over and had enough health to tank the shots I missed on… and the chaos zwei with 10 Humanity.

The Switch version of Dark Souls is excellent, plays great, performance is fantastic. It’s all there and right in the palm of your hand and really good if you get the Hori controllers. If they work well with DS, they will work well with Breath of the Wild and everything else.