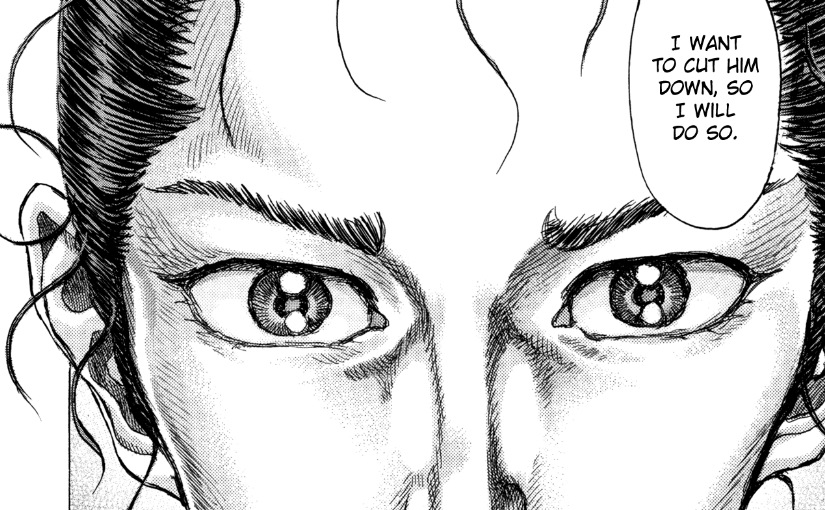 I first saw this Anime on netflix years ago, watching only the first episode. We just had a kid and I couldn’t give it the attention it deserved at the time. You can tell from the first episode, it’s going to be a series that rewards close attention.  My first draw was that Shigurui looked like the art style of Ninja Scroll with some of the same animators and, of course, it is, which should tell you something about it’s quality.  For those of us that grew up with Ninja Scroll as the GOLD STANDARD (along with Akira) for Anime,  Shigurui is like Ninja Scroll all fucking grown up.

From the outset, I want to highly recommend this anime with almost zero caveats… maybe just two.  First, it’s very dark and violent along the lines of 13 Assassins but a bit worse. Second it is UNFINISHED.  There is no resolution to the entire story, as that would have taken most of a second season which was never made. You never get to see what happens in the end, which a tough pill as things are set up in the first episode for a climactic battle, yet most of the series is a flashback that never flashes forward again!  How can you get the full story? You have to read the manga. That said, while incomplete, this is a masterpiece of anime.

What’s is Shigurui about? Like the film 13 Assassins, the series takes place during a peaceful era after the ‘warring states’ period in Japan.  And again, like 13 Assassins, a relative of the shogun is a Daimyo of a province and a full bore psychopath, one who dreams of a more violent era, regardless of the fact that he lives in lazy splendor and can kill servants on a whim. At the beginning of the first show we see him getting his head lopped off in a seppuku ceremony– one in which he ONLY touches the fan–he isn’t even given the time to touch the fan to his abdomen as is traditional– the executioner just lopped his head right off!  So he must have done something more than raping and killing peasantry right?  Right.

We then have a first flashback to a one armed man and a blind man about to duel to the death in front of said Daimyo. They prepare to fight and then another flashback occurs when one of the men (the blind one, but no longer blind) steps into a dojo. The other combatant is there and neither have any injuries (yet).  The show moves on to show the rivalry of these two men at the dojo, but then turns into something very different towards the end.

Add to this the fact that the master of the Kogan-Ryuu dojo is  insane, and lies in a state of dementia for most of the show, however, he has massive parts in the series when he is in his right mind and is probably the most dangerous character in terms of ability to apply violence. 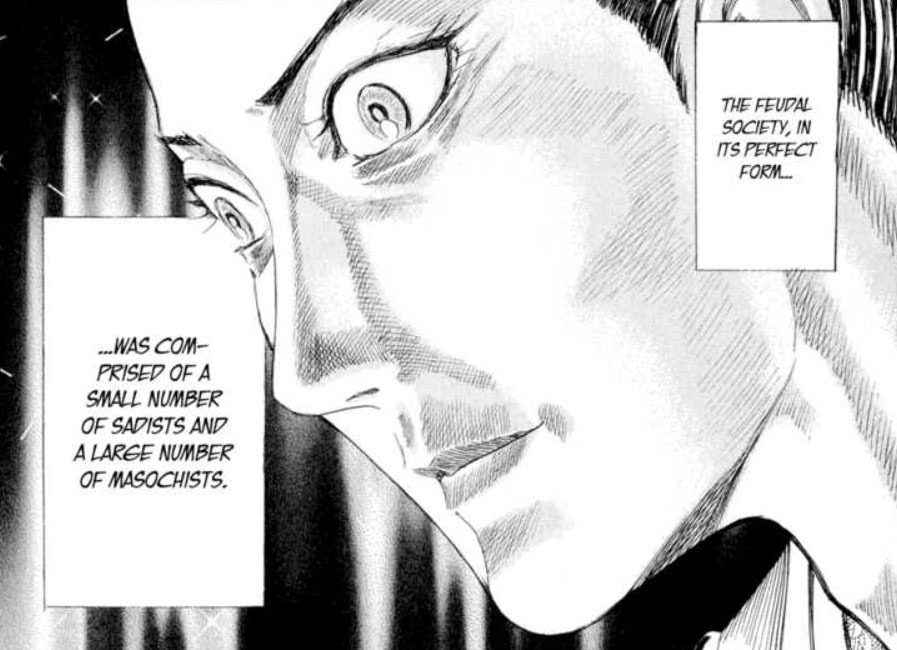 The show and manga has everything samurai you can imagine–various fighting styles, ‘magical’ or unlucky swords, western sword styles, rival schools. You know how Game of Thrones very much includes nearly every fantasy trope and most of the ‘fantasy’ races without being like a bad Forgotten Realms based Dungeons and Dragons movie?  Shigurui HAS all the samurai tropes, it just presents them in such a way–again, much like ninja scroll– that helps you forget that you are seeing/reading about the same old tired stuff that showed up during the ninja and samurai craze in the 80’s.

The meat of the show outside of the character development are the various fighting styles.  The fighting styles are extremely well detailed, and will have you thinking quite a bit about it as the learning of the two protagonists increases and they not only learn the secrets from the master, but come up with their own modifications and evolution to the styles.  Having read the manga, I can say that this continues well into the second half of the series and ends spectacularly.

One other thing I really like is that if you look up the series in google and do an image search, you cannot find out what happens in the final duel.  The manga author has many dream sequences and day dreams where BOTH of the main antagonists are show to be killed or terribly wounded during the final fight, so it’s impossible without reading the manga to get spoiled by the internet.  The picture you are looking at with the guy with one arm’s face cut off could be during the final duel, or could be a dream sequence.

The entire series is up on youtube.  The manga is a bit harder to get a hold of. 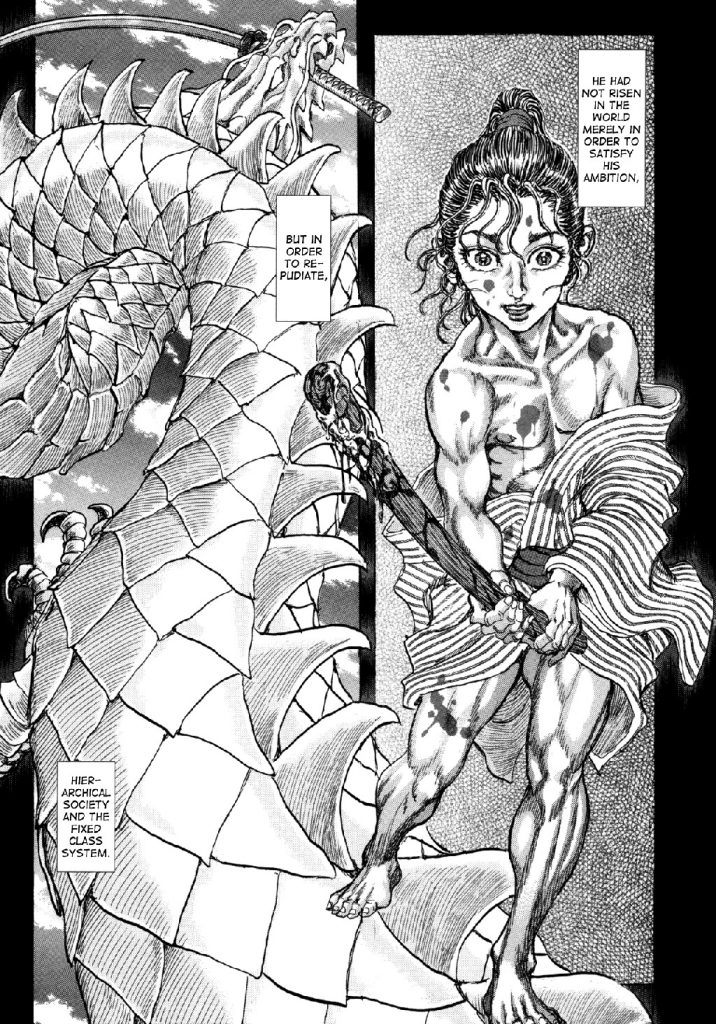 The only mechanical system that would be able to handle Shigurui’s level of combat depth and manner of wounds, is, of course, Mythras.  Most of the sword fights are over in a SINGLE stroke, which is simply not possible with D20 systems that use hit points, nor WFRP, nor 13th Age.  Story games would not effectively simulate the fights without far to heavy narrative control: you may as well just play with action figures at that point rather than roll dice.

In Mythras, both of the protagonists would have over 100% in their relevant sword skills (in the Kogan style), and you would probably need to break out different weapons having different skills (such as the shorter sword, the longer katana’s, and the big honking club thing one of the characters uses, and two swords at once).

One other thing that may be difficult in any RPG, even Mythras, is that the Kogan-Ryuu sword school students NEVER parry.  This means that the swordsman that strikes at the higher strike rank and hits is going to need to score a heavy wound most of the time to not himself be killed, but vs another Kogan swordsman, he will get a special effect straight away since there is no parry.

In order to simulate the sword styles, I would give special traits when characters got to 90 %, 100% and finally 120% skill levels, so every style would have three traits.  These are usually only given once to an entire style in the core game, but it should not break anything to give more, especially at such high skill levels.

I would also recommend using the advanced range and distance rules.  There are a couple of the fights in Shigurui where the range is critical.  In fact the first Kogan style trait I would add at 90% mastery would be that the sword used counts as one level up in terms of weapon length.

Passions can also be very useful in this type of game, as they could boost combat skills in certain situations to god-like levels.  Getting close to 10% chance of a critical is scary– 14-17% is insane.   Anyway, a game with Mythras where on one wears armor and no one parries could be very interesting…