We need to face facts, despite the size of the Iphone 6+, it’s still not a very good form factor for gaming.  All the really good stuff, with a few exceptions, is on the ipad (or the 3DSXL!).  Mostly I can’t read the stuff on the iphone (I want to say — “anymore” here but it’s not that) since the screen size is still super small, and they just don’t do the type big enough for most games.  While I liked quite a few games for a short period, many got too annoying at the screen size to really bother with for long, including, unfortunately, Heroes of Normandie.

So I’m left playing Tigris and Euphrates, (cheating) Backgammon, King of Dragon Pass and now and then, Ascension.  For those with iphones and no ipad to play actual games on, I want to point out a game in a genre that I thought could not be done at this size: an RTS!

Auralux 2 is a stripped down RTS game with a lot of stuff going on for all it’s minimalism.  The staples are there: real time attacking and moving fleets, building up fleets and timing.  The setting is an abstract space war.  I thought that there was no way this could be anything good seeing the istore entry, but it is and quite addicting at that.

What’s good about it?  It’s an RTS on the phone for starters, and because it’s so minimalist, the controls are super easy.  Tap and drag is pretty much it.  There’s no base building per se, just minimal upgrades and moving fleets.  For the basic gameplay, everything is awareness and timing.  When to attack, when to defend and build up, and when to move a fleet to a strange position for a ‘drop.’   I figured from the demo I would play just a little bit, but then it got real addicting once I tried some of the not-free constellations.  They have some really odd stuff, like moving planets, super novas and the like.  This adds some tactical challenges that are not present in the free demo so if the demo doesn’t totally grab you but you like it, grab one of the constellations.

The game is relaxing, but it does get very difficult at the INSANE stars within a constellation. I’ve only beaten the base one and the first Constellation so far.  There’s one level I just CANNOT get past currently. 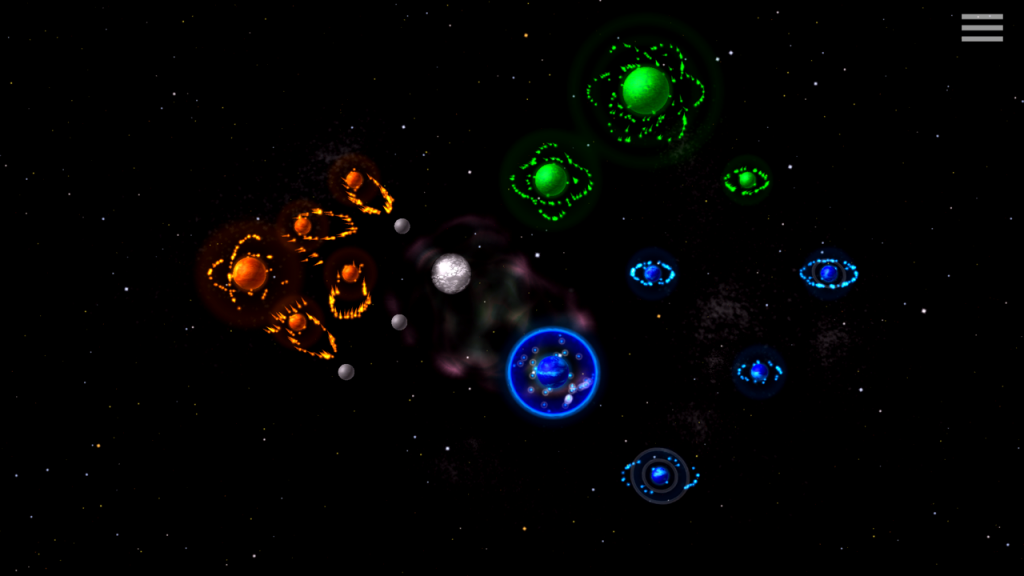 Best thing is that it’s free for the basic game and just a few bucks per constellation (about 8 levels each) after that.  I’d recommend getting the free version and then one constellation if you liked that.  If you can finish all levels in that constellation, you are probably going to be itching for more.