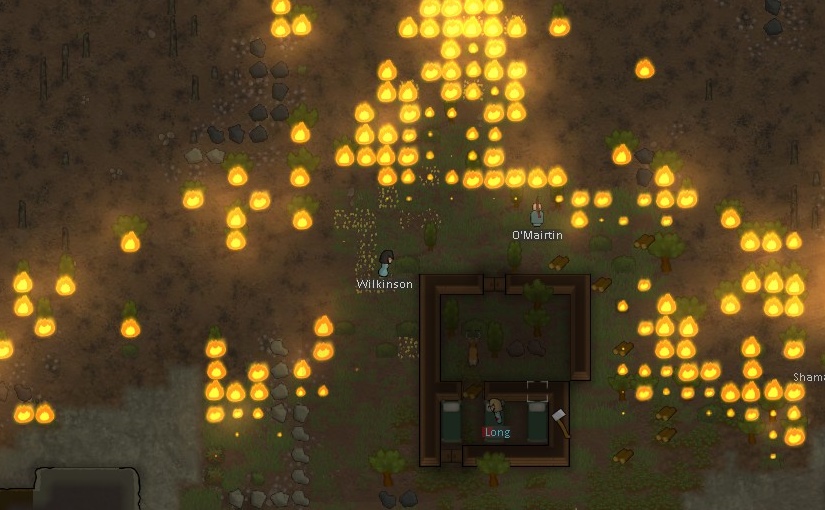 RimWorld is one nasty time sucker!  I’ve had a week off here and have played about 20 hours or so — all good times and solid frustrations.

The game is an ARPG/ survival game like we’ve seen so many times with many, many bad games in the genre–  but this one channels the most Dwarf Fortress stuff without the horrifying graphics and insurmountable commands, while being no where near as complex on the back end.  For example, when you do stuff in a space in Dwarf Fortress, that stuff stays there FOREVER until changed by some other agent in the game.  In Rim World, if you leave your colony for some reason, it disappears and re-randomizes the hex you used to be in.  So you can’t watch the deterioration of your bases after you leave them.

You start the game with either three or one colonists with various skills and abilities and you need to grow food, hunt, protect yourselves, tame animals and find some way to survive the winter, fallout, massive raids of mechanoids and natives. Typically, like Dwarf Fortress, this is a cascade of failure after about 4-5 hours of play in each game.  The way to play the game properly is to have a single save file so that you can’t go back to earlier games and try to avoid the RNG or bad decisions– but the game allows you to wuss out and have tons of saves.

How I start the game is this: land on the planet, pick up weapons and medicine, make a couple sleeping spots, then find a room that’s already built on the map and inhabit it.  Next I find where the “ancient evil” room is on the map and immediately open it up and see what’s in there.  Most of the time this leads to quick destruction, but sometimes it not only gives the colonists a solid flame proof building, but cyrocaskets and some tech weapons to boot.   This way you can either start off strong, or get wiped out and start a new game, which you will probably be doing eventually anyways. 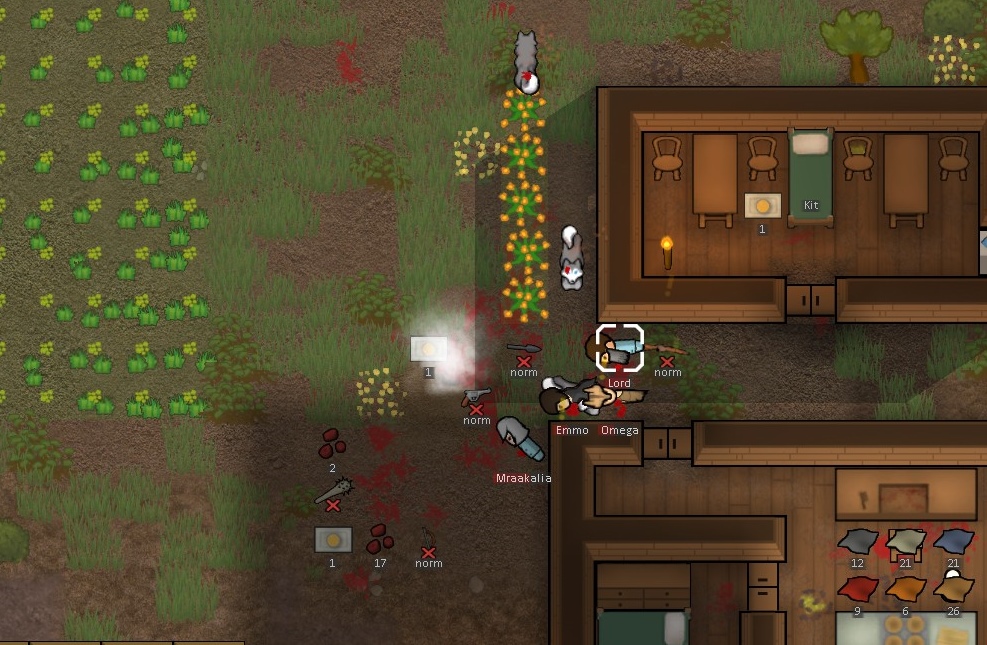 Combat is a frantic, pausable affair where you try to position your colonists in the best possible places to take on attackers in real time.  I haven’t gotten very high tech weapons yet, but that’s because I play hardcore for the most part, and haven’t survived!  There are quite a few different guns and weapons in the game, and it escalates into quite an arms race with your neighbors and raiders as the game goes on.

All in all, highly recommended.  The heart of the RNG in this one is in the right place for sure.