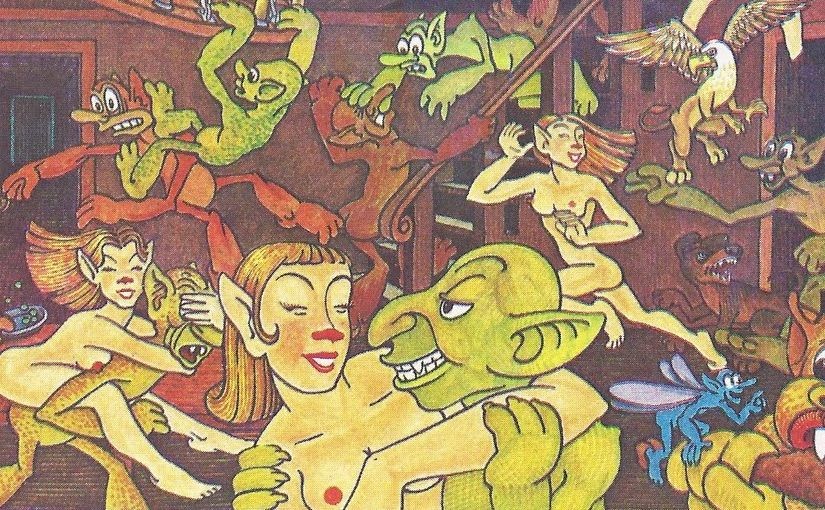 I was pondering my own desire for a Great Simplification in my RPG playing and GM’ing over the last few years and it lead down a path of wondering what year was the height of RPG complexity across the board? Now, sitting in 2015, the OSR is going strong, Numenera’s cypher system is still rolling forward (and the Strange) and has some very simple mechanics, 13th Age has stripped away the grid of 4th Edition and created an extremely playable D20, people are swinging off the nuts of the extremely simplified, deconstructionist spoof of D&D: Dungeon World. What’s more, Hasbro’s D&D v5 released last year, and while still fairly complex compared to the latter three versions, it has also undergone a great simplification compared especially to the two previous iterations. The pendulum has swung to the simple, but when was it at it’s apex of complexity that gave the current trend momentum?

The year I feel people were playing (and had an appetite for) the most complicated RPG’s in the history of the hobby is 2009. Since that year, I gut-feel (I ain’t going to track down sources) like the RPG community, as well as myself has been yearning for a simpler style of play, one that invokes more imagination and less about mechanics and OPTIONS. Yet, in the early 2000’s, I firmly believe that myself and many other people wanted nearly infinite complexity in our RPG games, and anything less was ‘just fucking shit we played as kids.’

Where did this desire for complexity come from in the first place? Why did we need so many character/monster/spell options and all this minutiae? People designed and produced these complex games hoping they would sell, and there was obviously a market for each being as complex as possible. But why?

I’d like to divide RPG players into two (overly) broad groups. First, the 70’s set– people that were born in the 70’s and played OD&D when it was actually published. These are the Holmes, Moldvay, Metzner kids. The second group (again this is broad) are the Lord of the Rings kids that played or started playing D&D 3.0 when the LoTR movies came out. The boost of those films to D&D and RPG’s as a whole was simply huge and there is an entire generation of people that jumped into the hobby, starting again with fantasy, during this time. What were these two groups both influenced by to make them want exceedingly complex games in 2009?  How did D&D 3.0, designed by the same guy that did Everway and 13th Age, end up being so complicated and by extension– all these other complex games!

Magic the Gathering. MTG had a huge effect on all gaming everywhere from 1993 on. I would say MTG had as big an effect as the creation and propagation of Dungeons and Dragons itself. What MTG did for gamers and game designers is to create a desire and acceptance of a vast array of asymmetric powers. A MTG deck is essentially a collection of powers that players need to know, memorize and combo. Not only do they need to know their own deck, they need to know as much about all the other cards in the game that may be played against them as well. Roleplaying games hence started having massive amounts of variable powers– especially Exalted and Warhammer Fantasy Roleplay (who even had all the player skills on cards).  MTG primed gamers minds for mass asymmetry and a desire for the same in their RPG’s.

Anime, and fighting games. Especially Ninja Scroll for starters and EVERYTHING else since and by extension ALL Japanese fighting games. I spent food money in college playing Virtua Fighter and Samurai Shodown 2 and the adoration of those games culminating in Guilty Gear and Virtua Fighter 4/5 created an appetite for a system where your character fighting opponents gave the players tons of options, tons of character styles and special powers, conditions, everything. I believe fully that Anime and Fighting games were extremely responsible for the rise in complexity over the course of the 90’s and 2000’s. People eschewed the muddy murderhobos crawling around in dungeons for scraps with just a few stats and a single damage rating– they wanted heroes that could SHIN SHORYUKEN!!!  Combat, never a strong point or focus of old D&D (despite how we played as kids) became absolutely critical to RPG system design.  Once you understood what was going on in the fighting engine of King of Fighters or Samurai Shodown, it was hard to look at your PNP RPG combats the same way.  Reinforcing the trend from D&D 2nd edition– anime propagated that characters should be ‘heroes’ and not just some git with a sword and some rope stealing stuff from a tomb or abandoned dwelling.

Vampire and the D10 system. This is called the storyteller system but compared to story games these days (Hillfolk, Fate, et al.) this was really a ‘universal mechanic’ RPG more than anything. The really awesome thing about Vampire, which no one had done before well, were the variable player powers based on caste/clan.  Suddenly players were able to take a fairly straight forward (and broken until the Trinity version of the game fixed it) difficulty/successes system and layer in THEIR characters variable powers, and see how the whole mess worked together. As much as I am not a fan of the vaguely gay (remember it was still only the early 90’s–it couldn’t be blatantly gay which would have been much better!) vampire soap opera stuff myself, I, like many other, viewed the system with some sort of awe, but just wanted it to be turned loose on a genre that wasn’t so…. goth and metaphor for being a closeted gay dude. (this ended up being Trinity/Aberrant and Exalted). Because the system was easy to add options to–they did– so much…

Warhammer 40k/Fantasy: Especially the 70’s gamers started spending MASS cash on 40K and Warhammer stuff in general in the late 90’s and early 2000’s.  The game was extremely pervasive in game stores, being the bread and butter of many stores along with MTG.  Warhammer is all about army/unit asymmetry and tons of variable powers for everything, with customizable characters to the nth degree (we rip on “herohammer,” but that shit is fun both on and off the table as long as it’s balanced).  Since D&D was derived from miniatures games, 40K has a similar root.  Warhammer is the natural hardcore extension of Swords and Spells and Chaimail, both of which are awful in comparison.

Now, there have been many complicated RPG’s before 2009, especially in the realm of ‘universal’ systems such as GURPS and the HERO system (starting with Champions) as well as, arguably, TMNT (actually a really good game for it’s time!) and Rifts which really wasn’t that complicated except for all the character options and SDC/MDC bullshit (and mass addons). Phoenix Command, Twilight 2000, Rolemaster from back in the day were all COMICALLY complicated simulationist style RPG’s. These last three are games that, if you accidentally buy at a gaming flea market for a couple bucks, end up not on a shelf or drawer for later ‘research’ fodder or toilet reading, but get fired directly into the recycle bin. Yet, these games came out of an era where I think no one knew jack shit about how to design an RPG in general, the medium being all so new after all, so you have to give them a bit of a break unplayable as they were compared to (most) games of today.

Next post, three RPG’s that define 2009’s complexity to a C!