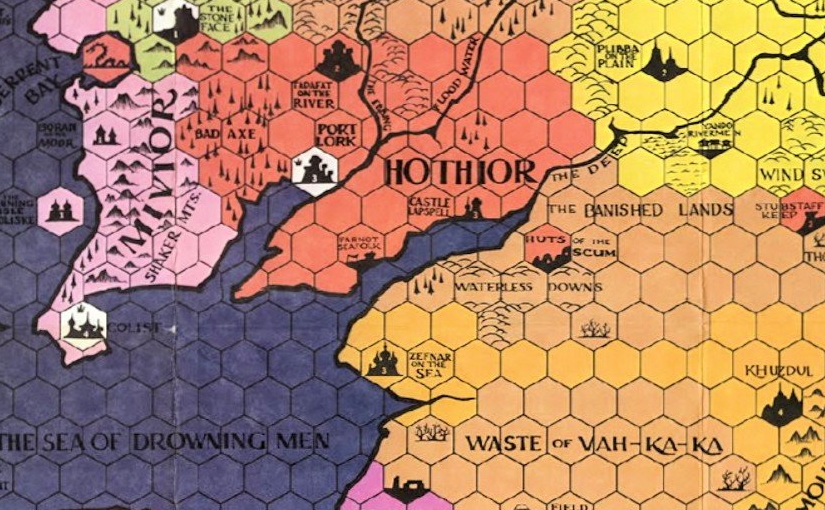 You read that right, 13th Age in Minaria— the campaign setting from TSR that never was, and could have been.

For the non old-person, Minaria is the fantasy world created for the Divine Right board game, which many of us had as kids in the 80’s. While the game was a bit labyrinthian for a 9-12 year-old as a hex and counter, the map board was on the wall of my bedroom for at least 15 years. The map and counter art is by Dave Trampier, and is amazing. The Tower of Zards, Invisible School of Thaumaturgy and all the awesome mercenary units (like Hamhara the dragon) were incredibly fertile ground for the imagination as a young and now older mainge.

The mystery is why this was not turned into a Greyhawk style campaign setting by TSR as all the assets were right there– just needed someone to start writing modules for it! There were multiple articles in Dragon Magazine on Minaria and it’s environs. Anyway, time to redress this issue!

13th Age and Minaria are a great combo as the 13th Age world itself is godless and pretty generic fantasy, especially since it has no gods which I’ve always found very strange. While Runequest has a bit too much to do with the gods for me, the 13th Age world just doesn’t seem grounded. The Icons in 13th Age are really just basic concepts and with Minaria, there are oodles of Icons that are far more interesting and engaging than the stock 13th Age ones. Yet on the plus side, you have the amazing 13th Age system, which is probably my most run RPG in the last 5 years or so. While Minaria is not explicitly high fantasy, it has enough of those elements to fit well with the more gonzo fantasy of 13th Age. Minaria and Divine Right are still products of the Gonzo TSR age.

I’m not GMing this one, which is a great break from almost always GMing and I get to play a rogue, so far my favorite class for the game (among many awesome class selections). The fun part about the rogue is that you can bounce around the combat area almost at will, you rarely get stuck, and you can hammer enemies.

I’ve only been in two sessions with the group so far and we are in some rather familiar house by the sea near Port Lork at the moment… and we’ll see where this goes.