Holy shit was it crowded. I’ve been there many years in a row (I think close to 20) and I have never, ever seen Gencon that crowded before.  All the parking lots were full, the entire con area was packed with people.  Normally you’ll see the same people around, the same security guards, the same cos-play nerds or larpers or insideout jelly doughnuts, but this year it was such a WAVE of humanity you’d never see the same people twice unless you went to the same type of regions in the gaming hall.

As this was Matt and Steve’s first time to the Con since it was in Milwaukee, I had some things to prove since I had been talking up Indy since it moved there– that it was and is far better than Milwaukee as a location for this large of a convention.  Milwaukee’s downtown is pretty but let’s face it, it’s got shitty hotels and it’s dangerous at night right in the area of the new convention center. What’s more, though I didn’t remember this much, Matt said that Milwaukee never welcomed Gencon as a city much, only tolerated it.

Indy is different for sure, the bars nearby all go into full fucking nerd mode when the con starts with odd menus and drinks. There seems to be a Warmachine bar and a Pathfinder bar–likely some others.  The people on the streets and in the attached mall (which is an actual mall, unlike the one in Milwaukee that is about as dead as you can get without being closed down) are confused by the gencon nerds, but not alarmed– they know there is a big ass nerd convention going on in the city and welcome it.  There are random gaming posters in shops, taxi’s hang dice from their rear view mirrors and so on.  All worshiping the nerd dollar descendant upon the town.

What’s more because the hotels are all connected (and quite nice) there is a massive and I mean massive party scene.  Remember the White Wolf parties circa 1996/97 at the Hilton with the kickboxing and tons of beers and drinks and chicks?  That’s going on every night of Gencon full on everywhere.

So what were we up to?  I got in late Thursday night and headed into the con messing around the crowded ass retailer hall until the 4PM Shadowfist tournament, which had a great turnout with 20 people.  I didn’t make the finals this year– but I played a REALLY crap deck and still pulled out a very lucky win in a game.   My other two Swiss games did not go well, but were fun.  I got to see what seems to be the trend after the endless big bruisers returning from the smoked pile of years hence:  endless big bruisers unturning and attacking over and over again.   Otherwise there was a TON of Ascended on the table this year compared to last. I counted four decks including mine.  After a poor showing in the last couple years for the transformed animals, that was great to see.  Mouth got to the final with his Bonechill deck but came in second.  We need to tune that fucker to win next year.  Matt’s deck was just not up to par and Steve’s relied on Infernal Army– while a big scary site-taker, is still basically a thug and got targeted for events or taken over more often than not.  Matt cornered some of the design team for Fist for awhile and gave them a probably undeserved earful about some of the issues with the game.  I guess I’d be happy if the Architects were back in the game and they didn’t have so many fucking NERD cards!!  Just slapping a nerd head on a previously created painting to fulfill a Kickstarter reward is not anyone’s idea of a card they want to look at.  Fuckn’ A.  What’s more, we encountered TWO decks where the player had centered their deck around a card with their picture on it.  This was terrible.  Otherwise, time will tell whether the new cards make a good effect on the game or if they are overpowered.  It certainly LOOKS like the dragons got a big boost.

Other than Shadowfist, we got in a few games of Seasons– which is excellent!  It’s in the Glory to Rome/Race  for the Galaxy vein, but the dice/action mechanic put it into the fun zone. While I wouldn’t say it’s better than Glory to Rome, I would play it over Race for the Galaxy and 7 Wonders any day (though both of those are excellent games as well).  Also we got in a horrible game of Eclipse where no one was attacking until the very end.  While I love the game, we’ve played so much I need a break from that one for awhile.

Shit that I saw.  My Little Ponies was fucking everywhere at the con.  For good reason, it’s a good show, but I think next year it will fucking EXPLODE even more.  There’s a CCG coming out that will likely be a Pokemon rip off (which is fine) that I’ll have to buy for my kids and I saw some odd mission based game. It’s certainly a franchise worth gaming up and while we look very much down upon the bronies from a high level and urinate– it IS a really good show for kids (and adults forced to watch it).  Even though it’s about female multihued ponies, the plotlines are excellent and much better than sitting through a five episode fight in Naruto…

A line at Fantasy Flight.  Yeah.. was this necessary?  They have some popular games for sure but a line? I think they are doing good work with the Star Wars license but… I am so fucking sick of the Star Wars license….let it go away again for a few years so we can like it again– it’s just been beaten to death.

King of Tokyo– I think the game is finally getting it’s due after a cult release as I saw it everywhere in the con and there was both a massive playset (with child sized monster stand ups) and a massive tournament going on.  This is a great game for beer and pretzels in the BANG vein and really good with the kids– even if they cannot read.

D&D Next? Where was it? Matt got the new book (which is chock full of art from the old sets) but I didn’t see anything special– especially compared to something like Lamentations of the Flame Princess–which is awful special (module called Fuck for Satan for instance).  I don’t know where WOTC are going to go with this next– but it’s nice to see all the Basic D&D and AD&D books reprinted beautifully after all these years.  Too bad AD&D fucking sucked.

Bolt Action.  I tried this out last year and I think it’s starting to get some traction.  There were five table setups this year for demos and the game looks great.  I splurged and filled out my 1000 point brits with a Cromwell and another infantry unit. I feel it’s a mash up of EPIC 40K and AT-43 and that’s a good thing.  So many tanks….

Here is my hoard of loots from the con. 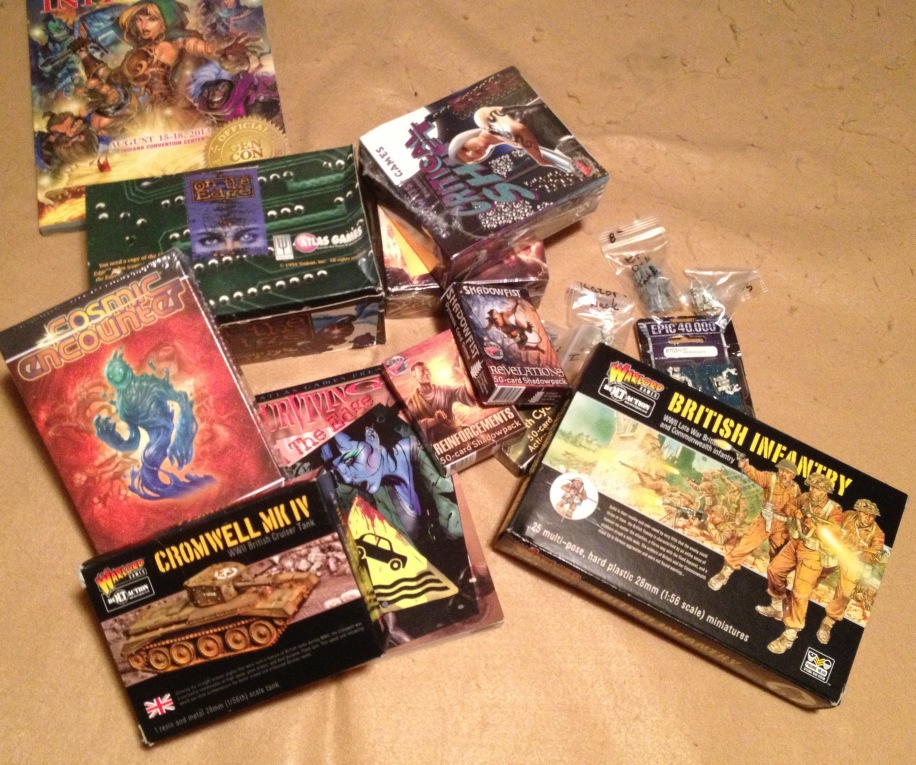 New Cosmic Encounter expansion was probably the biggest score.  I picked up another box of On the Edge (10$) and the On the Edge survival book which from what I’ve heard is EXCELLENT shitter-reading materials.  Fist was cheap at the con this year.  I scored a box of Empire of Evil and a box of Critical shift for 60$ total.  If we are going to go Zman only for playing going forward, I needed these— and I still needed them.   I was looking for some Blood Wars but it was nowhere to be found.  Also, Dreamblade was in just a few nooks and crannies…if you were ever thinking of picking that shit up at all, the end is nigh and I bet in the next 4-5 years the prices for stuff starts climbing and climbing…

I did pick up some random stuff for Epic 40K– Razorbacks and Ork dreadnoughts.  I’m itching to get that played again.

It was a great con, much better than last year when I had that coughing crud people had for a couple months at a stretch and hadn’t slept for weeks.  It was all still a blur but that was due to self-imposed sleep deprivation and the demon drink.  I hope Matt, Steve and mouth can come along next year as we could all get into some Roleplaying games in addition to the other crap, which was sorely missed.  Even with 3 days at the con– it was not enough gaming!