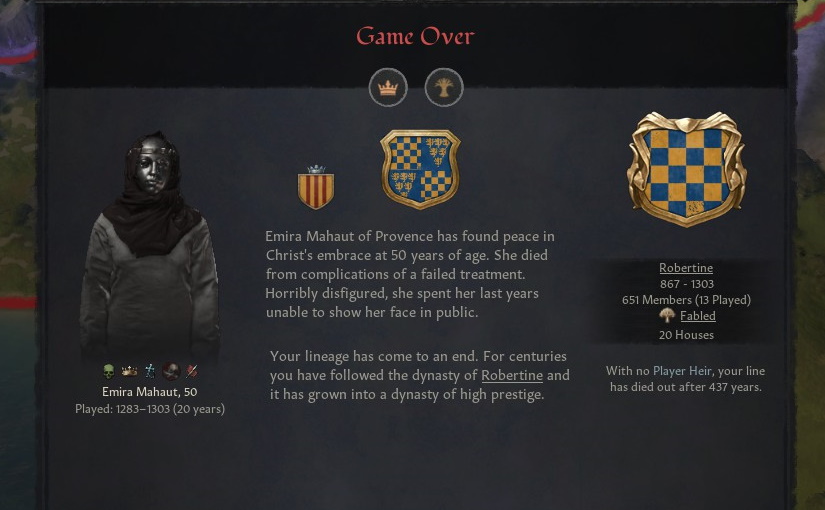 I want to do a long post about CK3. This is an amazing game. Here’s the TL:DR.

FIRST: it’s much easier to get into than CK2, which I gave the good colleddged try a few times and failed to figure out what to do and it definitely failed to pique my interest and I just yearned for Stellaris… this one is totally smooth. SMOOTH.

SECOND: this is not a conquest game like Total War, this is a medieval FUCK simulator with war-like…um… consequences. It’s all about relationships, both hierarchical and personal, hereditary and romantic. You don’t have winning goal– you set that for yourself which is extremely different than Total War or Stellaris. As a strategy buff, this seemed odd to me, but it’s great. It’s a sandbox and it’s huge.

THIRD: The things you can do are absolute madness. Eating prisoners, seducing relatives of either gender, creating a naked, satanic religion and then forcing it onto your subjects, running a bene gesserit style breeding program with your children and grand children to create what later amounts to a kwizatch haderach (or transalpine dwarfs….).

So what the hell is this game?

CK3 is a game where you play as a single person, specifically a landowning noble of some kind. When that person dies, if they have kids who can inherit their wealth and status and holdings (not just spawns that can’t inherit anything), you play as one of those children, otherwise it’s game over. You are incentivized to continue your bloodline and make sure you have enough heirs, so that with the high death rates of the early medieval period, you don’t lose the game.

You can start as anyone: a king, a queen, a count or a duke but not Barons or unlanded nobles (ie: no banking families— yet). You can start anywhere in the ‘old’ world (Europe to the western edge of China) as well as amazingly, Africa. You can play as nobles in the Califates, in the late dark age Viking kingdoms or as leaders of the Hausa in Africa. The scope is nuts.

Once you start, you will have a holding, house you belong to, family and a court that you need to manage. This comes with a small or large military, alliances, a current religion with all of the rules and complexity that goes along with these.

And here’s how this fucking madness can play out.

On my first play, I chose Malika of the Hausa, a matrilineal, tribal area in Africa. I got a husband and other mating partners (totally OK in Hausa culture, not at all OK in most others) and started the full auto birthcannon, just firing out kids. The issue was, they started to try to kill each other as there were no laws of primogeniture. Eventually my first character had about 7-8 kids– quite a horde and 2 of them died early. When my first character died, I thought: ‘Ok, I’ve built quite a power-base here and my oldest daughter is going to continue to kick total ass.’ NOPE! The rules of succession split everything among the female heirs equally and my main daughter immediately had to go to war with two of her sisters to reclaim (or claim rather) the lands that were rightfully hers. Meanwhile she racked up the consorts and started firing out kids of her own– but NO girls. So if she got killed, she I would end up playing as one of her sisters that I was now at war with, or at the last minute would have to switch to a patriarchal culture. Fan, fucking, tastic.

Being my first play with no clue as to what I was doing, I quit to start over. After running through the tutorial that starts in Ireland, then I began as Eudes, a little kid count in Western France, beset by enemies all around him with a couple of powerful uncles, one of which is his liege who has bigger problems to worry about.

Other than making sure I was not going to get immediately destroyed by the Vikings nearby, the first thing I had to find was a good woman just like the Hausa lady finding a set of good men to breed children, this is essential, and in Catholic France, you likely get only one shot at this. I have a certain… uh… type of lady that I like so I was like: why not let’s go look at Spain/Portugal and I found a similar age kid that fit the bill and had a positive congenital trait as well– boom! Betrothed which gave me an instant ally across the Pyrenees and some claims on some counties in the Basque region. I married off a sister which gave me another ally nearby. Then…

… I got– distracted. The map is gigantic, just mind-bogglingly large. I started looking at India and environs on a whim and BOOM: there were tits. Granted they were on a lady with dwarfism… Then the deep dive into the mystery of the naked rulers in India began– and then I found one in Eastern Europe. Why? What the hell and how can I get everyone naked?? How? I won’t spoil anything, but this led me to some deep respect around the religious aspect of this game. There are 15 Islamic sects alone and I have no idea how many Christian ones, including the Gnoscists, your leaders can, of course, create their own religions. These each have different mechanics and change the rules of the game, including, you got it: NUDITY.

I played as Eudes until he passed away happily having quite a few children and a few un-legitimized bastards and then the madness and obsession really began. When you start with one of the ‘try this first’ factions you feel a bit like you are on rails (you are not) but when that guy or gal dies, you know everything can and will change drastically, a lot like some of the better Total War games. Eventually, France collapsed under the constant conflict between rival counts and dukes, meanwhile raided from Vikings in the north and pressure from the south from the Islamic empire that had rolled across Spain. Eventually ALL of southern France was part of a massive Islamic empire who had also encroached into Italy. The only thing for it was for the Pope to call a Crusade and madness began again.

While the urge is to get the biggest Kingdom/Dukedom or solid heirs, sometimes, you just need do things out of spite. A few generations down I had an absolute rake seducer as a duke as well as some unruly vassals and they went and rebelled. The rebellion was crushed and I captured a couple of the rulers, most of which I tortured and then let go. But one of them had a comely lass for a spouse and no children yet! I left him to rot in jail, seduced his wife who must have been oh so lonely (she hated him anyway) and as soon as she was impregnated, I turned him loose from jail to cope with the fact that his primary heir was not his own child. This did nothing to advance the cause of my realm, but real good fun.

Another event was that I needed a good spymaster. I found some Teutonic broad in the low countries with a shockingly high intrigue stat, seduced her to my court, then my rakish duke had some kids with her. Over the years, I noticed one of her daughters had some amazing congenital traits and seduced her too (this was her daughter from a previous husband/lover) and when the Duchess died, married the duke to the daughter. Eventually, since her mom was the spymaster, she exposed the secret to her daughter that the duke had also humped her mom and there was an incident… luckily my duke had a high likability, otherwise you start to see murder after murder of your dynasty members from inside your own court.

Eventually my dynasty was stripped of all other Duke level titles and was stuck with just a Duchy of Provence (between Italy and France) and even though I had kidnapped my liege multiple times to get concessions, due to disease, murder and accidents at war, I was down to a barren duchess with zero male heirs in her line of succession and it was game over.

Again, this game has no ‘winning’ goal: you make your own goals and it’s just brilliant. You can play as a warlike Richard the Lionhearted, a foppish lout who whores and drinks, or a Bathory style torturer and murderer and anywhere in between. Then, next generation, you get to decide how to play again.

Lastly, I love how small, seemingly insignificant decisions later become massive problems or boons. Marrying off an ugly, scaly daughter to some bastard child of one of your vassals ends up accidentally with you controlling the province as the father murdered his bastard and a month later his son and heir, one of your knights, is killed fighting in a crusade.

They really knocked one out of the park and this will be played all Winter…I can’t wait for expansions: especially if there are BANKING expansions where you can play as the FUGGERS, etc. and not worry about all the owning land stuff.