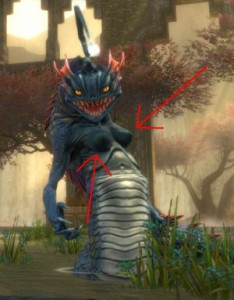 I LIKED the demo. I bought the game. The demo SOLD me on the game. I especially enjoyed the combat. The fighting felt solid and fluid. I had control of the action and it mattered that I timed my blocks, dodges and attacks. I was playing Skyrim at the same time and was amazed at how much better the combat felt in Amalur. The skill choices in Amalur are spread out over three main character types. These skill trees seemed cool and interesting in the demo. The game let you spread your skill points over the three skill trees, never locking you into any particular path (this is the first problem and you’ll find that out much later). So as I said, I LIKED the demo. That is where I should have stopped myself I think.

Insert EA rant: People this is a EA game. FUCK YOU EA. I can safely say I will not buy another EA game ever. When I pay 60 dollars for a game I don’t want to be reminded about DLC EVERY FUCKING TIME I START THE FUCKING GAME EA! I don’t want to see that fucking STAR by the Downloads menu item in the main menu for the game EVERY FUCKING TIME I PLAY! YES I SEE EA THAT YOU WANT ME TO SPEND MORE FUCKING MONEY! YES I SEE EA AND NO I DON’T WANT TO FUCKING BUY ANYMORE EA SPACEPISS! EA GET THAT GOD DAMNED STAR OFF MY SCREEN YOU FUCKING COPORATE FUCKASSES!

So here’s how Amalass plays. You’ll play the game for about 3-4hrs and more or less at this point you done EVERYTHING in the game. From this point on you’ll be playing a rehashing of more or less the same enemies, quests and find similar loot for the next however many hours you choose to spend playing. AND YOU CAN SPEND A SHIT TON OF HOURS PLAYING THE SAME SHIT OVER AND OVER. I was maybe 20hrs in when I finally stopped with the non-main quest shit and just powered right through the main quest in 6hrs. I didn’t need to level up anymore and the game was fucking so gawd damned easy on normal. I just got to a point in the game where I was fucking bored and upset with how generic and shitty everything was feeling and said, “Okay, how about now I just win this shitty game.” And so I did, I followed only the main quests, running from yellow circle objective marker to yellow circle objective marker, skipping all the useless dialogue, fighting the same fights over and over and won.

Yes you get more skills on your way to the fucking boring ending but the new skills don’t do anything that great! I got a crowd control skill that I had to use over and over as a melee fighter. Unlocking shit skills that have to be used is a GAY! Where is my choice now? I level up and if I don’t use these new skills I lose. Fucking dumb. AND if I do use them I win instantly. The game is balanced in this strangely perfect way, when you are doing the “right” thing the game is insanely easy and quickly becomes boring after your 10-12th victorious battle.

OH ya I tried to play a fight/thief character, it FAILED. Once I respected and put all my skill points into the fighter tree I instantly became 100% more deadly. ? Why the fuck let me break my character by spec’ing into two or SHIT three trees at once? Is that some way of making the game cooler? Here gamer, put points into any tree you want. If you happen to use only one tree, BINGO you’re good! If you experiment with using multiple trees, FUCK YOU, you’ll hopefully get around to respec’ing into one tree only and quickly see HOW FUCKING WRONG YOU WERE!

The game is worth 10$ tops! Normal people will play 4-6 hours and stop cuz that is all the fun there is in the game. Shitty buffet trough feed americans will play all the fucking way through and buy all the DLC and want more. This game is the mount everest of mediocrity and I climbed all the way to the fucking top and took a GIANT piss on the dead diabetes ridden gamer corpses that littered the peak.

All that said I did craft a fucking KICKASS great sword that did 50+ more damage than anything I found in the game, so that was cool. The crafting system was cool. The fighting system is cool for 4-6hrs. The animations/enemies are very Todd McFrainer or whom ever the fuck that comic guy is. The world art is okay, very wow’ish but it’s fine. I can’t help but think a great number of people wasted a HUGE amount of time making this incredibly so so game.