she got cornered. she got killed. 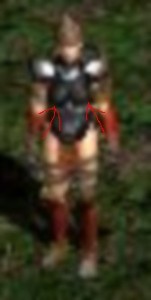 kunninglinguist is no more. she was gang banged to the great beyond in the final chamber of Viper Claw Lair. it was mainly my fault for running too deep into the mobs and not having a belt FULL of rejuv’s. once kunninglinguist was surrounded, it was time to give up. why the fuck i was not recording that boss fight is beyond my understanding for failure.

some thoughts about the amazon in diablo2:

– MANA CONSTRAINED GAY. you never have enough mana.
– the amazon was the first character i played when i bought d2 back in the day, i loved this character. but after playing hardcore version i will never again, the play feels too slow.
– i guess i needed some spear skills to help kill bosses?

some thoughts about hardcore death:

– it’s GREAT! you never know when your endgame play is happening until just before it happens.
– would be nice to see the items i lost and check some stats on the dead characters previous life. you can’t even load a ghost character to see all that shit.
– i’m almost possitive all my hardcore characters will die on the bone spear arms of duriel.

here’s a video of kunninglinguist last days in d2, you’ll see how long the boss fights were taking me and i’m sure that is a sign of the amazon being a shitty character at the lower lv’s.